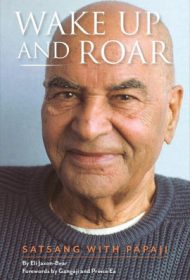 In a brief biographical segment, we learn that Poonja (1910-1997) was the nephew of Swami Ram Tirtha, noted Indian poet and teacher. He had spiritual leanings from childhood, and in later life was contacted for guidance by individuals who knew of his relationship with the great master Bhagavan Sri Ramana. The book’s editor, Eli Jaxon-Bear, and his wife, Gangaji, who wrote an eloquent Foreword, are American spiritual seekers who, in 1990-91, tape-recorded intimate group meetings, or satsang, with Poonja, known as Papaji. The text of Wake Up and Roar is not a literal transcription but is based on these recordings.

Papaji’s talks, which took place in his house in Lucknow, are arranged here by topic, not chronology, with chapter headings such as “Who Are You?”; “Practice and Meditation”; “Desire”; Realization,” etc. He is revealed as a spontaneous, eclectic teacher who advised his followers to detach from worldly desires. His unnamed visitors pose questions; Papaji answers them directly. For example, when a listener asks if he can stay and serve Papaji, the master answers, “If you don’t know yourself, what help can you be to another?” He can also be amusing. A physician asks whom he should serve, and Papaji unhesitatingly responds, “Patients.”

Some may relate Papaji’s interactions to the “hard sayings” referred to by Jesus; others may be reminded of the mystical pronouncements of the Zen masters. To the uninitiated, Papaji’s responses may sometimes seem like rebuffs but are framed to help the aspirant think and, paradoxically, learn not to over-think spiritual dilemmas.

Papaji died in 1997, leaving no writings for study by later disciples. These annals, filled with his quiet wisdom, offer a glimpse into his philosophy and method of interacting with his devotees. They are sure to be appreciated by his followers and perhaps new devotees as well.

Also available as an Audio Book and ebook.