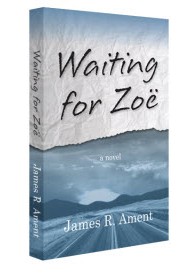 In retired executive James R. Ament’s novel, Waiting for Zoe, a naive young student and a grieving retiree make parallel journeys of self-discovery in the wake of great loves, deeper tragedies, and the shadow of violence. Unfortunately, the startling, often over-the-top catastrophes that pepper the novel detract from its more subtle emotional narratives.

We first meet Russ Mack, a retired businessman suffering from his daughter’s death in an automobile accident, followed closely by his beloved wife Sara from breast cancer. Simultaneously, the story picks up a young activist’s life on the eve of the 2008 election. Pretty journalism student Zoe Valiente is in her third year at Columbia University. To broaden her horizons, she’s packed off to Demming, Wyoming, to be mentored at the local paper by Martin Coleman, an old-school editor who knows the end is near for newspapers. Meanwhile, Russ has fled to the mountains of Colorado, where he reflects on family memories to help him escape the pain of his loss.

Both characters are well-rounded and realistically portrayed, but the degree to which the author persecutes them is borderline gratuitous. ZoÃ« in particular gets the roughest treatment. She falls in love with a young cowboy who survives a savage encounter in the wilderness. Soon after, Zoe suffers an abrupt loss in her own family before finally enduring a bewildering and superfluous blow upon returning home to the city. Life, as they say, may be suffering, but a story needs to add up to more than the sum of a character’s woes. An added problem is that the author tends to talk around events that would be better shown.

Waiting for Zoe is a thoughtful contemplation of courage in the face of despair that is ultimately burdened by these flaws.

BlueInk Heads-Up: Rocky Mountain readers and especially librarians may want to seek out this book, as its western themes and settings may appeal to regional interests.