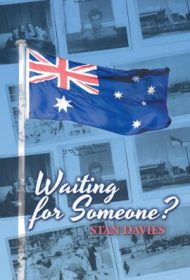 In his memoir, Waiting For Someone?, author Stan Davies writes about a long romance—one with complex currents rippling beneath the surface.

Davies writes about falling for Irene at just 17. Their courtship was rocky at best, and he joined the Royal Air Force to heal from a breakup, and to escape his tyrannical father. They stayed in touch despite it all and soon eloped and started a family, although Davies’ military posts and a variety of subsequent jobs, including postal and telegraph work, kept him moving around the world.

While stationed in Cyprus, he suspects Irene of having an affair and terminating a pregnancy to conceal it. When the family moves to Australia, there are hints that she may have strayed again. “I didn’t make a fuss about it. What was the point?” Davies writes. He seems to want to avoid a confrontation because Irene experienced sexual abuse as a child.

At just 62 pages, this is a quick, just-the-facts narrative, but it’s also engaging storytelling. Davies sketches out his various travels and the family’s reasoning when they once again pull up stakes and move (they ultimately become Australian citizens after one freezing English winter too many). He and his wife find work with each move, and their two children adjust to the constancy of change.

The story ends abruptly after two tragic losses: the death of the author’s son in a car accident in 1994, and, a year later, Irene’s death from a heart attack. One wonders how his life progressed over the next quarter century.

Waiting for Someone? clips along, and we feel this couple’s urgency around moving toward the new and seemingly trying to leave the abuses that shaped them behind. We also see that past mistakes are sometimes repeated. Although a view of the author’s life in the years since this narrative ends would have been appreciated, this short book provides an interesting, heartfelt read.