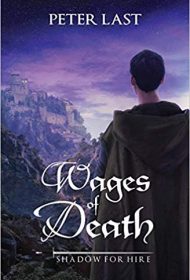 The Shadow is an elite group of mercenaries, a quartet of thieves, spies and assassins who gladly dismiss any moral quandaries for the right price. This team is the focus of Peter Last’s Wages of Death, four short stories detailing four Shadow team assignments.

Daniel, The Shadow’s leader, directs three teenagers: Leopold, Raven and Midas. The group accepts assignments ranging from storming a seemingly impenetrable castle to collecting a plant from a dangerous marsh to killing a horse to teach someone a lesson. They also take a job seeking ancient, magical relicts assembled by witches.

The stories are set in a vaguely medieval world that blends references to the magic and mysticism of straight fantasy with cues from our own past. For example, the group accepts one assignment on Christmas, and characters reference the celebration of Jesus’ birth; in introducing the character of Midas, the author refers to the Greek legend.

Here, setting doesn’t play the central role of imagined worlds common to most fantasy stories. Instead, the emphasis is on the characters and the challenges they face operating as mercenaries. As the team moves between assignments, dealing with shady characters and mortal peril, they begin to question their purpose. Team members often echo the refrain “Anything for money,” but their resolve ebbs as the jobs become more dangerous and morally bankrupt. The author tries to test The Shadow’s mercenary commitment to money, but there’s not much growth or change among the characters.

The overall concept is intriguing, and Last offers plenty of genuinely compelling action, but there isn’t enough of a foundation or sense of cohesion throughout the stories to create an enthusiastic investment in The Shadow. These brief sketches offer flashes of fun and escapism, but hardly any profound or memorable message.

Without proper context, these stories of teenagers who’ve supposedly carved out a reputation as the most dangerous mercenaries in the world never gel, resulting in a somewhat flat read.