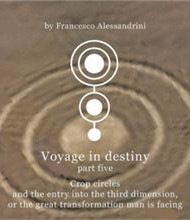 In Voyage in Destiny, author Francesco Alessandrini offers a discussion of crop circles that combines science with spirituality.

An Italian civil engineer and university professor who specializes in geotechnical subjects, Alessandrini believes his five-book series is part of his destiny. The books–only two have been published–are the result of his discussions between 2006 and 2009 with a “Master of Light,” a being the author describes as a “spiritual entity of the highest level.” These discussions led the author to “abandon the arrogance of believing the thoughts generated by the human mind as the only ones possible.” They also introduced him to a method of interpreting crop circles.

According to this Master of Light, crop circles are not made by extraterrestrials, but rather globules of energy that manifest as orbs of light. Humans known as terrestrial-extras, or earthly angels, transmit this energy and create the circles as a way of communicating with mankind. (Alessandrini doesn’t explain how they physically do this.) “Their most important messages are those related to the ‘wrong’ path that man is taking, with the intention of putting us on the ‘right way,’” the author writes.

With the help of diagrams and photographs, Alessandrini skillfully combines geometry, physics and other scientific measurement with spiritual information to interpret famous crop circles in a way that make sense for both left and right brains. The book loses its left-brain focus altogether, however, when the author interprets the Bagnaria Arsa crop circle in Italy. He concludes that the circle marks mankind’s official entrance on June 29, 2010 into the third dimension, which he describes as a sort of Shangri-La in which we will all live in a collective consciousness.

This voyage deep into mystical territory will likely derail readers with any degree of skepticism, which is a pity, because otherwise, the book offers an interesting and unique interpretation of the crop circle phenomenon that will appeal to theorists and factualists alike.