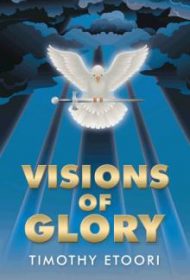 The poems in Visions of Glory offer a series of social commentaries and spiritual meditations. Poet Timothy Etoori addresses issues such as abortion, HIV, child labor, and genocide from a Christian perspective and presents Biblical messages of warning as well as hope for confronting challenges of recent history and the present day.

The collection is arranged into 16 sections with broad subtitles such as “Values” and “Devotion.” The poems in the book’s second half each begin with a Bible verse; the pieces that follow either retell the Biblical narrative in question (e.g. the Fall of Man or scenes from the End Times) or interpret the verse for readers.

Etoori has a strong command of language, and his most successful poem “Katanga”—which he wisely showcases as the first in the book—engages readers immediately through specific, sensory details that conjure a rustic bar setting: “The tin roof/ Radiates heat,/ The damp shirts/ Smell of sweat,/ From the radio cassette in the corner/ Music assaults the senses.” Its spare but powerful wording suggests unspoken import as “The chatter clatters/ Over brown bottles.”

Unfortunately, the majority of poems are marked by didacticism, generalizations, and clichéd images. For example, in “Sex Revolution” the speaker judges people who have “casual sex” as “Spiritually numb/ Walking zombies,/ All dead.” Other poems, like “Fruit of the Spirit,” are overloaded with abstractions and clichés: “The shadow of greed/ Chokes out the sunshine:/ The frustration/of unfulfilled ambition/ Gathers overhead/ Until the blue sky/ Is overcast with grey.” Cerebral words like “greed,” “frustration,” and “ambition” don’t deliver vivid images. Likewise, linking “sunshine” and “blue sky” with positive feelings and “overcast” skies with negative ones is a trope so overused that it has lost its power to stir readers’ emotions.

Given the book’s impressive first poem, Etoori is clearly capable of building toward more nuanced and notable work. With careful revision, the poems here would be more likely to attract serious readers of contemporary poetry.