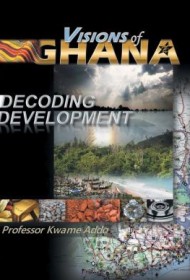 Written by Ghanaian-born, U.S.-educated, South American Professor Kwame Addo, who calls himself a development “architect,” Visions of Ghana is a large, colorful treatise examining the concept of national development both in general terms, and in the specific situation of one African country.

Addo believes strongly that Ghana can be a model for other nations. He begins with a brief history of Ghana’s changes from a gold-trading kingdom, to its domination by colonial powers, to its modern rebirth as an independent democracy. Using copious pictures illustrating the country’s demographics, resources, and infrastructure, Addo offers a “roadmap” of practical strategies for the future.

The author urges Ghana to connect with other countries in what he calls “the Sabuntawa [replenishing, renewal] vision.” Ghana is rich in natural resources including gold and cocoa, and has an environment conducive to international tourism. If the government remains stable and transparently democratic, the author posits, and if Ghana’s people find agreement on pertinent issues regionally as well as among themselves, the country can attract wealthier trading partners to invest and further the ideals of this vision.

Addo has created both a textbook and a blueprint, considering development from the broad national perspective down to basic levels that include upgrading slum areas, paying attention to local political processes, and modernizing education.  Employing a variety of media, from cartoons to maps to color photos, Addo links individual requirements for decent sanitation, less crowded living spaces and personal safety to larger issues of infrastructure and international dialogue. His clearly stated ideas are inclusive and convincing, and these, combined with the effective graphics, gain and keep the reader’s attention.

Composed with idealism and practicality by an author who has connections on three continents, Visions of Ghana is a laudable effort to impact developing nations in a positive way.