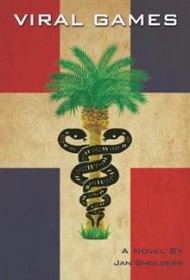 Viral Games is set in modern-day Santo Domingo, Dominican Republic, and focuses on the operations of AVISIDA, an organization educating the poor and treating those afflicted with HIV/AIDS. AVISIDA is far from scrupulous in its “Good Samaritan” practices.

The lid of the group’s façade is blown sky-high when Anita Tavares, a high-ranking financier of a global donor foundation that controls millions of dollars of fund monies for non-governmental organizations (NGOs) such s AVISIDA, is murdered shortly after arriving in Santo Domingo. Rumors spread that she may have been killed to prevent the incriminating contents of her stolen luggage from reaching authorities. And so the shady players in the story rush to protect their profit-making schemes from being uncovered by the police and the press. Greed runs rampant in a system where underpaid staff is easily corrupted.

It doesn’t take long before another murder, that of Julio Diaz, the honest director of ALLIANCE (an AIDS NGO), is killed by a hit man in Columbia. Are the murders connected? Blackmailers get to work threatening those in power to expose their nefarious secrets.

Author Jan Smolders has not only crafted a suspenseful thriller but succeeded in bringing to light a startling truth: profits often rule over justice for the victims of AIDS. Readers may encounter some confusion in the story’s use of similar Latino names, such as Enrique, Eugenio and Emilio. Regardless, such a minor drawback is easily overlooked by the merits of extensive character development and steady pacing, and the author’s eye-opening insights into the dark side of organizations entrusted to save lives.