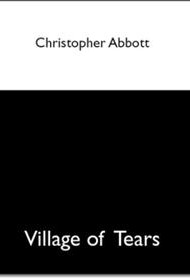 Invited by a former law school classmate to stay at his family’s New Jersey estate, Caleb Magellan finds that the picture-perfect town of Promise hides some ugly secrets in Christopher Abbott’s novel, Village of Tears.

Haunted by memories of his abusive father, Caleb hasn’t been able to settle down and make a commitment to anything except his devoted dog Sara. So taking some time off to enjoy unspoiled countryside around the secluded McCoy estate seems like a good idea. But it’s a good thing Caleb made friends on the way into Promise with Pete Barry, owner of a general store a few miles away, because he’s going to need outside allies: the town’s super-affluent residents do not like strangers poking around, and Sheriff Millstone makes it his business to ensure that nosy intruders are never heard from again.

It’s obvious from the novel’s prologue, which depicts the 19th-century murder of a runaway slave who thought he’d found refuge up North, that Marcus McCoy, the Virginian who founded Promise in 1863, was not the Confederate-hating transplant local history claims. Instead–and readers are likely to realize this long before Caleb figures it out–the town’s residents not only got rich serving the South during the Civil War, but they are still benefiting from involuntary servitude 150 years later.

There aren’t many surprises in the narrative, which moves relentlessly toward a series of gory confrontations that kill off many of the main characters, good and bad. The interest here comes from some lovely descriptions of nature and its soothing impact on Caleb, an intriguingly troubled protagonist whose conflicts are persuasively drawn. Despite a few too many last-minute rescues and a cartoonish villain-in-chief, Village of Tears has enough psychological substance to give some dimensionality to its standard-issue Dirty Deeds Uncovered plot.