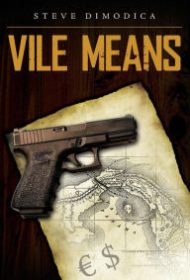 The story begins as Holocaust survivor turned Swiss banker Norris Stanton meets with a Mossad officer about an ambitious plan to destabilize the tiny but vital nation of Panama, where millions of dollars in goods are channeled through the Panama Canal. Meanwhile at the CIA, attractive young field agent Jessica Flekk is tapped to secure the services of semi-retired Special Forces operator Robert Gordon, who has banished himself to live in a monastery in rural Vermont.

Ultimately, Jessica and Robert lead a small team of mercenaries in carrying out two goals: first, to disrupt gangs that are terrifying the populace in Panama City, and secondly, to destroy an insurgent group’s growing military base in the nearby jungle. But the insurgents have their own secret weapon: a man known to them as The Serb, an absinthe-addicted sadist who lives to rape and torture his victims.

Many countries have an interest in the economics of the Panama Canal, and the novel rockets between Panama, Washington, Tel Aviv and Beijing and invites readers into the CIA’s shadowy world, as analysts, politicians and spooks each promote their own murky agendas.

Readers may be frustrated, however, by an overly complicated plot and the narrative’s inadequate explication of the Israelis’ motivations; it’s often ambiguous why certain characters are involved. Readers may also find the book’s material a bit dated—President Bill Clinton’s foreign policy goals figure prominently into the plot, for example. Nonetheless, for those with a substantial attention span, this epic spy novel offers an appealingly unique combination of action and suspense that should prove satisfying.