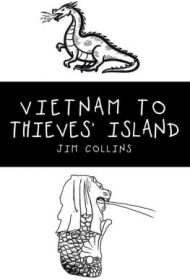 Engineer and sailor Jim Collins recounts his many decades of adventures, from 1965 to the present, while working and journeying through the Asian Pacific, from Vietnam to Singapore, Malaysia, Myanmar, and the Philippines, to Saudi Arabia.

A Tasmanian-born Australian, Collins opens his memoir on his first major professional gig living in Saigon and helping construct hydraulic works in 1965 during the Vietnam War. With an entrepreneurial sense and a dare devil’s willingness to try anything, Collins launches from there into working and sailing through Southeast Asia and the Middle East. He ultimately builds his own sailing vessel—not his first but his most enduring—an aluminum catamaran, and takes to a nomadic sailing existence, anchoring at various ports of call in the Pacific.

Collins writes with entertaining tongue-in-cheek wit (“Everybody laid lower than a snake’s hip”; “I left the Mike Delta office an enlightened man—indeed, fifty thousand dollars lighter”), portraying the quirky and colorful characters he meets along the way. He’s also insightful about cross-cultural experiences, offering a rare window into the Vietnam War as he portrays international individuals and corporations working in a country torn by corruption and chaos.

Unfortunately, the memoir reads more like a collection of vignettes, musings, and anecdotes than a fully coherent narrative. It lacks a consistent and clear structure to orient readers in time, motive and place. We never learn, for example, why Collins left Vietnam for other climes and how all his adventures fit into the overall chronology of his life. We are also surprised to learn that he has a wife who has partnered in many of his adventures, as her first mention isn’t until page 31. She thereafter makes few appearances, leaving an unanswered question about how she got to each place and came to share Collins’ life at sea.

Nevertheless, some will enjoy Collins’ pithy and playful economy of words, humorous voice, and original life colored by rich cross-cultural encounters across the Pacific.