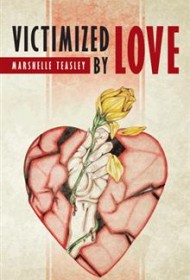 Victimized By Love is presented as a novella of sorts. A woman named Tracie reviews her difficult life, beginning with her abandonment at birth and tracing a long path through horrendous abuse, neglect, foster care, life as a runaway, and a series of relationships, each of which seems more abusive than the one before. Nevertheless, Tracie’s sense is that of having gone from being victimized to “victorious” through a powerful faith in God.

Victimized By Love may be looking to ride on the coattails of Push, the novel by Sapphire that inspired the movie Precious. The urgency of Teasley’s writing suggests this may be a thinly veiled autobiography. (There’s also the fact that, more than once, she uses the first-person “I” instead of ascribing the action to Tracie). Anyone who has come through such hardship and wants to reach out and share his or her story with others deserves respect for their tenacity and admiration for their generosity.

That said, the book is often hard to read. A typical passage: “As she repeatedly with this behavior the juvenile courts send her further and further out from where she was familiar with to stop her from running away, it didn’t.” You can ferret out the meaning, but it’s a struggle.

If this is a novel, Teasley has tried to capture an epic story and squeeze it into 61 pages without success. If the material is drawn from her own life, though, the real success story is Teasley’s steadfast faith in the face of adversity. If she truly wants to take this story public to inspire others, a ghostwriter could spin the raw material here into gold, or at least a gripping memoir.