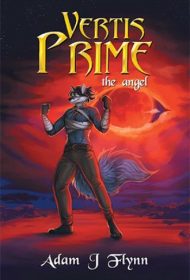 Two factions wage an epic struggle in Vertis Prime: The Angel, a fantasy combining elements of magical realism, military stratagems and political intrigue in an original approach to the genre.

Adam J. Flynn imagines the fictional world of Vertis, a place where two races—the Felids and Canids—battle to secure their freedom and independence. Unlike more orthodox takes on the fantasy genre, these races aren’t humanoid. The Canid Nation comprises anthropomorphized coyotes, foxes and wolves, while the Felid Empire features lions, leopards and lynxes. All possess the power of speech, advanced culture and, most importantly when it comes to Flynn’s plot, the ability to wage war.

Indeed, the book begins on a martial note, as negotiations between the Felids and Canids for a lasting peace begin to break down. Immediately, the author offers insights into the evolution of both societies: The Felids are more reliant on tradition, mysticism and magic, while the Canids have evolved toward technology and literalism.

A group of Canids in the small town of Hillscrest respond as news breaks of an imminent incursion by a Felid force. As the two sides clash, readers learn that this is more than a straightforward political struggle: Ancient philosophies clash; heirs to royal legacies battle against immortal beings.

Flynn offers a sprawling, complex and intricate vision of a fantasy world rent by conflicting loyalties. He mostly succeeds in setting up a clash of basic ideologies, even while dealing with issues of race and class. The story’s political minutiae, however, can seem overwhelming. From the prologue, readers are inundated with complex details regarding the races’ loyalties, individual histories, prejudices and foibles. Such dense context makes full immersion into the story difficult. Eventually, Flynn finds the pace of the battles, and in the ensuing magic, mysticism and character development, the story hits its stride.

This novel could use some refinement. Still, Flynn offers an action-packed take on the fantasy genre that’s refreshing, if a bit dense.