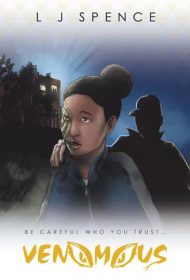 Told in the third person, the novel follows Ebony, who miraculously survives a lethal snake-bite. This event gives Ebony the attributes of a snake, such as producing venom and shedding skin, which she is ill-equipped to manage when returning to normal life. For example, she accidentally mortally poisons her dentist.

After a family catastrophe occurs, mysterious friends, who share her snake-like characteristics, essentially adopt Ebony. They claim to be protecting her but turn out to have malevolent intentions. Spence’s final scene offers a plot twist that leaves the door wide open for a sequel.

The core idea of Spence’s story shows great potential; the concept of human snakes is unusual and could appeal to fans of both werewolf and vampire tales. The novel’s execution, however, is lacking.

Frequent typographical and spelling errors make it hard to follow the narrative. For example, at one point, the author writes: “A warm summer afternoon had brought people in their droves to visit the animal sanctuary…” ; readers are left to wonder if the author meant “droves” or if the visitors were arriving in remote-controlled planes. Other confusing errors include the use of “he” to refer to a female character.

It’s especially problematic when the author confuses the names of characters. For example, in a critical passage that links Ebony’s aunt Stephanie to the conclusion’s major plot twist, Spence mistakenly refers to Stephanie as Moira, Ebony’s mother.

Additionally, many of the major characters lack the depth that would help readers relate to their situations. For example, Ebony’s estranged father’s apparent callousness is never fully explored, although his behavior is critical to the conclusion.

Spence displays creativity with the concept of Venomous. Overall, though, the novel requires major revision to make it accessible, even to devoted fans of the fantasy genre.