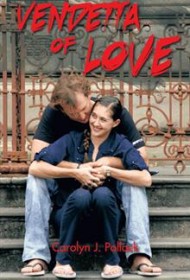 Vendetta of Love is a standard romance novel with a hunky hero and beautiful heroine playing the requisite sexual tension game.

The book is set in Australia where the lovely young Mackenzie Phillips is nursing her loneliness three years after her husband’s death. When her next-door neighbor Dean Ashleigh moves in, she takes an instant dislike to him – but not before noticing that he’s tall and handsome.

As luck would have it, Dean is the new deputy head at the high school where Mackenzie teaches. After a series of flustered encounters, the pair falls in love, only to be thwarted by a series of misunderstandings.

As with many romance novels, there isn’t much plot beyond the push-pull of Mackenzie and Dean’s relationship as they navigate one trumped-up problem after another: Unaware that Mackenzie is a widow, Dean thinks that Mackenzie is meeting her husband Steve when she’s actually meeting her brother, also named Steve; Mackenzie jumps to the wrong conclusion after overhearing Dean on the phone. When an interesting secondary plot begins to unfold – the reader is told passively that a student has accused Mackenzie of inappropriately touching him – the matter is resolved without any fanfare. The spotlight is clearly on our lovebirds; the story is less steamy than many romances but just as predictable.

For romance readers who devour these formula novels, Vendetta is a light meal. There is one minor jarring note. Pollack includes eight pages of photographs of her friends posing as “Mackenzie and Dean.” The photos are distracting, because the essence of a romance novel is fantasizing about the hero and heroine. Lines such as, “Gittering dark eyes raked her from the top of her head to the tip of her toes…” require no additional information.