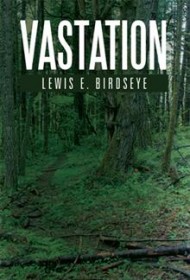 Eighteen-year-old Josh Donaldson reluctantly goes along with his father’s manic plan for a father-son bonding experience in this dystopian coming-of-age novel.

When Josh follows his dad into the forests of Oregon, he figures the worst that can happen is that he has to listen to the older man’s constant philosophizing on subjects ranging from the origins of Easter celebrations to the fires of Dante’s Inferno. Since this has been the soundtrack of Josh’s life for years, the burden doesn’t seem too heavy. Only a couple of days into their journey, though, the esteemed professor and his homeschooled student get some frightening lessons that they hadn’t anticipated.

Author Lewis E. Birdseye is a new novelist with an academic background that echoes the career path he assigns to Josh’s dad — multiple degrees from Columbia University followed by years of teaching. So it’s not surprising that the voice of “Dad” defines Vastation. A trailside tree is no mere provider of shade, but an opportunity for a history lesson: “This tree was a seedling when Marco Polo travelled to China, was a stout young adolescent when Magellan circumnavigated the globe….” Josh regards his Dad’s reference-packed lectures with humorous skepticism, which makes them entertaining as well as educational.

The most important lesson here is embedded in the book’s one-word title. A vastation is a deep form of self-destruction, followed by a renewal, or purification. When the journeying men happen upon an anarchistic band of criminals hiding in the Willamette National Forest, they are forced to face these destructive forces head on. It’s a rite of passage for Josh as tension builds in viscerally violent scenes that make Vastation a page-turner as well as a meditation on humankind’s finer moments in history, art, and literature.

Read it quickly once through, to find out what happens to Josh, and then again at a slower pace, savoring the eloquent musings of a scholar and philosopher.