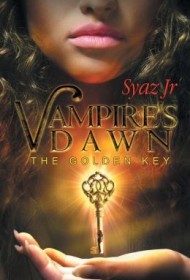 There’s plenty of promise in the first installment of Syaz Jr’s Vampire’s Dawn series, which boasts a mature writing style and keen sense of narrative.

The story concerns Isabelle Oriel, a 16-year-old girl who learns that twins Darren and Joanna, newly arrived to her school, are actually vampires. The revelation sets the tone for the book’s larger cast of characters, which includes other vampires, both good and evil.

Syaz Jr. rapidly introduces grandiose conflicts and big stakes via teenagers, vampires and an understated, tasteful narrative style. She also weaves in elements of teen romance between Isabelle and Darren. Their attachment develops as a wide range of villains, monsters and supernatural creatures bent on murder beset the protagonists. Meanwhile, Isabelle learns more details about her own important role in the main conflict, as the heir to the mystical Golden Key.

Although the basic premise of vampires popping up among a population of teenagers is hardly new (think the Twilight series), Syaz Jr manages to stake claim to an original story. The eerie twins – Darren and Joanna – are interesting characters that help give the novel a distinct feel. Isabelle and her best friend Iris are similarly well-developed characters, as are the villains that eventually start to haunt the story’s protagonists.

The shortfall here lies in the book’s brevity. At less than 80 pages, the author has a tough time fleshing out the main conflict so that it is truly compelling and interesting. Readers barely have time to get attached to the main characters when ancient evils begin to target the twins and their new friends and the cliffhanger ending arrives.

While Syaz Jr offers promise in her writing style, sense of character and familiarity with the contemporary vampire genre, the story could use more detail and intrigue. Even so, this is an easy read, and the book is likely to offer moments of genuine interest for fans of this specific genre.