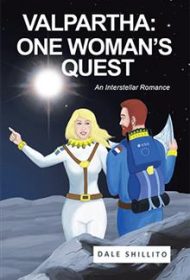 This science fiction romance revolves around Swedish geologist Astrid Svenson, who is part of a deep space mission that discovers a planet ruled by women.

It’s the chance of a lifetime for 26-year old Astrid, who is assigned to the elite crew of the European Space Alliance’s state-of-the-art spaceship, whose mission is to explore Alpha Centauri. But the ten-year journey to the distant star system turns into a living nightmare for female crewmembers. Many are raped; Astrid is sexually assaulted twice. In one case, her perpetrator is given a mere ten days in the brig.  As the captain and his henchmen spread anarchy throughout the ship, Astrid and friends make contact with the planet Valpartha and seek to bring the rapists (who make up almost half the male crew!) to justice.

Once at their destination, Astrid and love interest, Henri Brule, begin exploring nearby planet Arkenu. They find it populated by primitive cultures, and in one sequence, Astrid is raped by a tribe chieftain. Throughout this—and other ordeals—Astrid ultimately decides how she wants to spend the rest of her life.

The story’s underlying sexism is deeply disturbing and presents this release’s biggest flaw. The objectification of women and gratuitous use of rape are intensely troubling, and the sexist undertone destroys whatever thematic impact Astrid’s journey of self-discovery has. Instead of portraying Astrid as a strong, self-empowered woman, the author delivers a damsel in distress: “Please, Henri! I beg you! I need your help and your protection! I feel so vulnerable, and you’re so strong!”

In addition, the almost nonexistent exploration of Valparthan history and culture, coupled with a complete lack of visionary world-building, offer no sense of wonder. The Valparthans, for example, are essentially human with a few superficial tweaks. The creatures on Arkenu are described as reindeer, sea turtles, etc.

With its unsettling rapes, minimal focus on science fiction elements, and even less on romance, this story will have limited appeal.