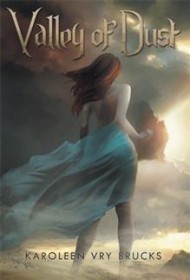 With Valley of Dust, Karoleen Vry Bucks offers a novel best described as a vampire romance. The book opens with the protagonist, Selene Holmberg, taking art classes by day and tending bar by night. Although Selene knows that she is different from most people, she is unaware that she is one of the few living strigoi. The strigoi, according to the author, are magical beings that gain their power by draining the life force from humans or the elements of nature. They are the source behind the legend of the vampire.

Selene goes for a jog one fateful night and is saved from an attacker by one of the two strigoi who have been keeping a surreptitious watch over her. The two strigoi, one evil and one relatively good, are brothers in the midst of a power struggle. As Selene gradually learns to master her powers, she finds she must choose between the brothers and prepare herself for battle within the strigoi society.

The rest of the plot involves the various entanglements, romantic or otherwise, between Selene, the brothers, and the one mortal friend that Selene manages to make. While this all makes for much drama, the author fails to engage the reader in it, as the story is largely superficial and in need of the kind of thoughtful expansion that would give it depth and texture. As it stands, it reads more like a daydream than fully fleshed novel. The book could also use some editing to eradicate the run-on sentences and correct for verb agreement.

Due to its flaws, Valley of Dust is likely to attract a less discerning set of vampire fiction fans. Those who focus primarily on plot, and who can’t wait to get their next vampire fix, may find this book acceptable.