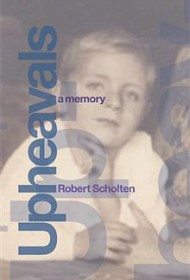 Robert Scholten’s Upheavals is a thoroughly engaging memoir that illuminates a little-known aspect of World War II. It strikes an artful balance between personal history and the historical changes taking place on the global stage at that time.

Scholten grew up in the Netherlands and joined the Resistance movement while he was a student at the University of Amsterdam. He spent years imprisoned in a series of camps run by Germans, nearly perishing when Allied forces mistakenly bombed one. After regaining his freedom, he came to the U.S. to study geology, eventually becoming Emeritus Professor at Pennsylvania State University.

Scholten writes with emotion and wry humor; his adolescent lusts are recounted in detail, and a post-war trip to Sweden shocked him with the excess on display: “One had simply forgotten what it was like to live in a consumer society, where people looked well-fed and well-dressed and drove around in cars and ate bananas and smoked American cigarettes as if that were the most common thing in the world.” Punishment and privation were common in the camps Scholten lived in, but he emphasizes that they were worlds apart from the camps that Jews were sent to, much safer and more humane, and thus little remembered in the history of the war.

Upheavals has a generous handful of typographical errors, but they don’t detract from Scholten’s voice or story. He has given us a rich slice of life on the page and an expanded view of the Second World War that enlarges our understanding. His book will be of much interest to historians and any reader with an appreciation for intelligently written memoirs.