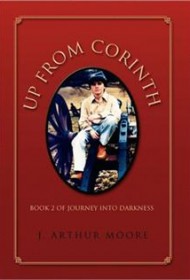 Eleven-year-old Duane Kinkade encounters kindness and cruelty wearing both blue and gray uniforms in this second volume of a projected fictional tetralogy about the Civil War by retired schoolteacher Arthur Moore.

Searching for his father in the Confederate Army after his mother was killed by raiders, Duane is wounded during the battle of Shiloh. He’s rescued by Union doctor Dan Marshalton and his assistant Johnny Applebee, a boy not much older than Duane. They take him to the Union encampment, and while Duane is healing, the three become fast friends. Dan wangles improbable permission for Duane to join a Union scouting party as a courier (would they trust a boy whose father is a Confederate soldier to carry important messages to the Union command?), and the boy spends the rest of the book wandering in and out of various battlegrounds and field hospitals, gaining expertise in dressing wounds and viewing firsthand the horrors of war.

The suffering on both sides is the focus of this tender-hearted tale. When a Confederate soldier Duane is bandaging in the aftermath of a battle is fatally shot by a Union corporal who snarls, “The only good Reb is a dead one,” Duane explodes: “It’s people wantin ta be killin like ya done here as makes this war! If’n not…my ma’d be alive taday ‘n m’pa’n me’d be ta home takin in the crop.” (Although Moore again strains credibility when General Sheridan arrives on the field, busts the Union sharpshooter to private, and promises to reunite Duane with his Confederate dad.)

Despite the lapses in credulity and occasional clunky Southern dialect, Moore engages our interest in a smoothly written narrative, and Duane is an appealing protagonist who stands up for human decency in several dangerous situations. As he heads off alone in the wake of the battle of Murfreesboro, readers will hope that Duane finds his father and better fortune in the next installment of his adventures.

Blue Ink Heads-Up: This would be an excellent resource for middle-school American history classes, giving a boy’s-eye view of the Civil War and reminding students that kids their own age were caught up in active duty during the war.