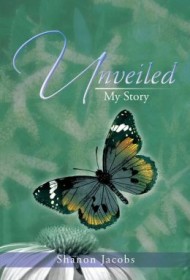 Shanon Jacobs’ book of poems Unveiled: My Story is aptly titled, for its main theme is a woman’s struggle between independence and intimacy.

Many of the poems explore Jacobs’ struggle to understand, and sometimes mourn, the loss of personal relationships. The poem “The question still remains …” begins: “We used to have it all / Now everything came to a fall.” While the poems are sincere and have an appealing earnestness, the language fails to go beyond the vague. This and other poems use simplistic emotional language: “You felt bad / And I didn’t mean to make you sad.” There’s no description or dramatization of the actual conflict, so readers are left at a distance.

Some poems lament other people’s selfishness, such as “Unexplained—Going Through Hell,” which warns readers, “It can happen anywhere / Because these people don’t care…” The subsequent poem, “Unexplained—Battle Between Good and Evil” asks, “Is it a curse to be born nice? / Or will people become jealous and play you like a dice?” Both of these poems seem to find answers in the biblical quotes placed at the end of them. The narrator gains solace in religious explanations for people’s wickedness.

This collection contains many raw emotions, and the narrator’s pain and longing is apparent on every page. So, too, is her struggle to uplift her spirits and keep hope alive through the grace of God’s goodness.

While the poetry itself is at a beginner’s level (simple syntax and rhymes, default to couplets in most poems, clichéd imagery, abstractions as opposed to specificity), this book may appeal to some readers looking for accessible poetry that is about personal challenges from a Christian woman’s perspective.