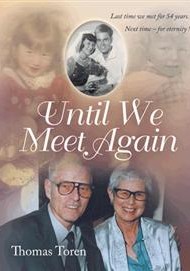 Thomas Toren’s life, as he recounts it in this memoir, has been one of upheaval and travail – and finally, success.

Born in Berlin in 1931, he escaped Nazi persecution when he and his stepfather fled Germany a week after Kristallnacht. Meanwhile, his mother went to prison for her relationship with a Jewish man; it was 22 years before Toren saw her again. The author was raised in a Russian community in Harbin, China, eventually immigrated to Israel, and later moved with his family to Australia. A skilled engineer, he invented a complicated machine for the mass production of plastic products that left him financially set for life.

The book’s purpose seems two-fold: first as a tribute to his late wife, Lisa, and second to tell his story to his granddaughter, Laura. It’s no surprise, then, that Toren’s writing seems almost conversational. In one passage, he begins by talking about playing the piano as a child, segues to a description of his piano teacher, then to his love of music, then to a recent concerto he enjoyed. It’s as if Toren is sitting in an easy chair, recounting his life for a listener, complete with charming asides and a confession to occasional memory lapses.

In other words, readers won’t be held spellbound at all times. Occasionally, Toren gets a mite dry, such as when describing his work: “We prepared charts of the complex sequential controls, with interlocks where required, to actuate the micro-switches and proximity switches…”  But the jargon lapses are few, and he knows when to stop. “That’s enough about work,” he writes in one passage before moving to another topic.

At several points, Toren directly addresses his most important audience: Laura, who was a 21-year-old art student at the time of publication. While the general public might not be as invested in the story of Toren’s life as his granddaughter is, this is a document that she, and other family and friends, will surely treasure.