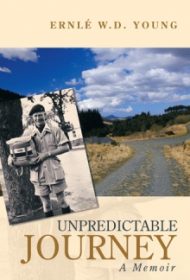 Ernlé Young’s Unpredictable Journey recounts his life from his birth in Johannesburg, in 1932, to his present retirement with his wife, Margaret, in Talent, Oregon.

As a Caucasian boy growing up in South Africa, Young enjoyed singing, woodworking and playing tennis. He showed an early interest in egalitarianism, forming strong bonds with “a black child” named Stanley.

While Young’s first profession was as a master printer—which allowed him to pay his “own way through university”— he eventually found his primary vocation in following his early dedication to moral principles and just actions. After hearing Joe Webb, a Methodist minister in Johannesburg, fearlessly denounce apartheid in South Africa, Young, too, became a Methodist minister, and in 1972 was appointed Superintendent Minister for the Trinity Methodist Church in Bloemfontein. There, he fought tirelessly for racial equality, eventually having to flee with his family to America because of government pressures.

In America, Young continued his dedication to ethical causes, working for such institutions as NASA and the Stanford School of Medicine, and co-founding the Stanford Center for Biomedical Ethics.

Young’s impressive life is conveyed with straightforward writing and many interesting passages, especially those concerning ethics and apartheid. For instance, Young tells about fighting for interracial services and launched a campaign to raise the minimum wage for domestic servants from an average R10 ($5) a month to R25 ($12.50).

The book in its entirety, however, seems more likely to appeal to friends and family, rather than general readers. Young devotes significant space to family information: for example, he discusses his genealogy, the professions of his wife and children and the vacations and times they’ve spent together. He also includes the names of friends and colleagues who are ultimately irrelevant to the greater story. Unfortunately, it’s doubtful readers will persevere through these portions, even to learn about his role fighting apartheid.

A revision focusing on the larger significance of his life rather than unnecessary detail would greatly enhance this offering.