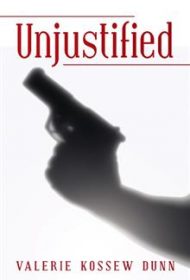 Valerie Kossew Dunn’s Unjustified is a murder-mystery written in the vein of Agatha Christie.

Detective Dina Barrett has been sidelined by a bullet. Relegated to surveillance work, she is assigned to go undercover as a student in the Whitney University library, where police suspect the librarians of passing drugs to students along with their books. There, she stumbles onto an intriguing case of a murdered professor who, despite being publicly lauded for his books, is professionally loathed by colleagues who see him as nothing more than a playboy and plagiarist.

Dina learns that the case is being investigated by her partner, Detective Jackson Blaustein. Sensing danger, and knowing Dina hasn’t fully recovered from her gunshot wound, Blaustein cautions her against getting too involved, but she delves deeper into the mystery, finding more questions than answers. Soon, she becomes part of the story herself.

At times, Unjustified has the air of an English Victorian mystery. Most of the characters are very proper, speak formally, and serve tea to their guests from elegant tea service sets, while throughout, the author gives several nods to Dickens. The story is set, however, in modern day Connecticut, making for a jarring disconnect between the characters and the world in which they reside.

The story is also often repetitive and wordy, rehashing conversations, clues, and theories, which slows the pacing down to a crawl in spots. Strangely, Dina is offhandedly referred to as “Diana” a handful of times, making it unclear which name is correct. And many times, readers are told by the characters about plot and character development, rather than discovering these elements through action, rendering the denouement unsatisfying.

Despite all, Unjustified is a pleasant read peppered with historical literary references that may appeal to lovers of language and academia. What it lacks in suspense it makes up for in rich descriptions and enthusiasm for the genre and may prove satisfying for those looking for a light read.