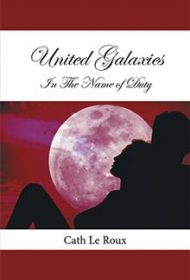 The story focuses on Major Melanie (Mack) Mackenzie of the United Galaxies Federation (U.G.F.) battleship Alliance and her romance with First Lieutenant Quin Jaffa Al Sotar, third in line to the throne. Although Mack has higher military rank, Quin’s elevated social status by law precludes them from marrying each other, which they both desperately desire.

After more than a year of them working together and privately engaging in a passionate love affair (complete with explicit sex scenes), Mack decides to escape the situation and enlist in the secret Shadow Corps, a Men in Black kind of operation where agents must give up their former identities until retirement. Shadow fakes her death, and Mack begins working undercover for Quin (with her face hidden and voice disguised), which proves just as painful as her former circumstance.

Characters within the U.G.F. deal with their own physical and emotional struggles, which create surprising intertwining subplots. Individual alien races are richly drawn, but world-building is generally limited to life onboard the Alliance, with planetary visits serving primarily as military excursions.

Unfortunately, the well-developed story and characters are far superior to the writing. There are distracting technical errors on nearly every page, including spelling, punctuation, noun-verb agreement, run-on sentences, missing words, wrong words, and tense changes. Many sentences contain multiple errors: “Off [sic] course I will, but only if you’re [sic] Uma says its [sic] ok,” and “Quin now said with a bit of a tick [sic] in his jaw, a sure sign he was starting to loose [sic] patients [sic],” for example.

With aggressive editing, the story would be an enjoyable work of romantic science fiction. As it stands, the text requires revision before it is ready for an audience.