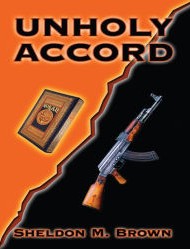 Self-described former gangster Sheldon M. Brown, who has written four novels in prison, shows remarkable ambition in this crowded thriller that harkens back to the likes of Tom Clancy but also more deeply explores the emotional lives of young men drawn to terrorism.

The novel opens at the end of 2000 and follows five young Afghans who have been recruited to the cause of Ramdan Amarov, a morally bankrupt Chechen warlord. Three of the terrorists set up shop in the Gulf Coast; two others find themselves in the Cayman Islands, where the close-knit, faith-based community makes it difficult for them to operate.

The American cell lands the first blow in their jihad by sneaking onto an air base and blowing up several dozen warplanes, while the Cayman crew turns to armed robbery to fund their aspirations. Meanwhile back in Pakistan, Amarov launches an attempt to assassinate the President of Pakistan. Traveling between America and the Caymans, an FBI agent tries to put these myriad leads together.

Brown’s writing is workmanlike but has a structural density that could prove off-putting (extremely long passages without paragraph breaks), not to mention a tendency to describe events instead of showing them. That said, one has to admire the scope of the novel, which culminates with a biological attack on Florida and the Cayman Islands.

The novel also demonstrates a mature empathy for its subjects, who are portrayed with unique insights:  “To get inside the mind of a suicide bomber was like opening a treasure chest filled with hate, anger, despair, and a total lack of regard for oneself, and anyone else, who they saw as objects rather than human beings,” Brown writes. “…They were essentially, walking, emotionless triggers, who were simply waiting to be pressed.”

It’s in these moments that Unholy Accord ceases being an entertainment and instead becomes a frightening mirror of the way we live now — and a book worth reading for such insights.