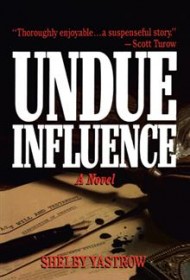 Until retirement, Shelby Yastrow spent his career as a general counsel and vice president for McDonald’s Corp. in Chicago, which is where he sets this engrossing legal thriller. Yastrow’s legal knowledge is apparent as he leads readers through a strange and complex probate case that showcases various lawyerly motivations.

Phil Ogden is an attorney who one day writes a will for octogenarian accountant Ben Stillman, and then promptly forgets about it. Months later, a cleaning woman who worked for Stillman delivers a letter from the accountant to the lawyer relaying the news that Stillman has passed away and is counting on Ogden to fight vigorously to uphold the will he wrote for him. Ogden also learns that the deceased has left nearly his entire estate to a Jewish synagogue, and that estate is worth $8 million.

This raises questions as to where this lowly accountant got $8 million, unless he stole it from the brokerage firm where he had worked the past 40 years. Also, why did Stillman, a devout Catholic, leave all that money to a synagogue? Soon, the larcenous owners of an oncology clinic with a Stillman will of their own show up to muddy the waters further. Lawyers with various motivations start coming out of the woodwork. It is up to Ogden and some unlikely allies to get to the bottom of these questions and make sure the money ends up where its deceased owner intended.

Yastrow wrote Undue Influence over 20 years ago, and the story could have used some updating regarding computers and cellphones. Nonetheless, he does a sharp, edifying job of writing a thriller in which the only death comes from natural causes and which covers perhaps the driest aspect of law: probate. He shows not only how lawyers strategize and maneuver legally, but how they treat each other as rivals. Yastrow’s lucid and tough look at a sometimes merciless profession makes for a thriller out of the ordinary for its genre.