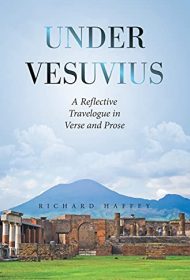 Richard Haffey’s Under Vesuvius is a capacious, absorbing collection of poetry and prose, artfully rendering his travels to Italy in 2016. It also contains a novella set in mid-16th century Italy.

The book’s travelogue portion is a well-paced, utterly compelling account of the author’s decision to travel to Italy after losing a cherished teaching position. Haffey offers an introduction for context; two poems of “Preliminaries,” which include his travel arrangements; and a tour of Italy organized by place. He rounds out his return to the States with four poems, an “Endpiece” and “Epilog.”

Haffey’s poems are replete with vivid detail (“Bougainvillea bracts cascade in reds, pinks, and purples in/ huefulls from window boxes, trellises, and wall espaliers”). But his writing never reads as mere description or reportage; the depth of the emotional field is always present. Looking at frescoes in Amalfi, for example, he writes that “Frescoes seem to disappear like memories do,” weaving the theme throughout as he describes the paintings’ content. In “A Sunday Walk in Naples,” he writes: “Almost our last day./ The rain made the sad city teary.”

With his precise recollections of place (“At first, they remind me of gingerbread houses. Unroofed./ Twice as long as wide.”) and his ability to draw greater meaning from it, readers will feel deeply satisfied when they eventually reach the prose “Epilog.” Here, Haffey recounts an article in Smithsonian magazine reporting new technology that could help decipher ancient scrolls. Art and life merge as he contemplates the amazing possibilities, ending with the fittingly simple and emotionally charged “I tremble. I cry.”

After this, however, Haffey introduces a well-crafted novella “related to the themes from our Italian travels,” abruptly shifting genre. While there’s broad thematic overlap between this and the autobiographical work, these projects are too disparate in tone, time-period, and reader experience to comfortably coexist in the same volume.

Nonetheless, this is an accomplished collection. Readers will find themselves savoring Haffey’s rich, evocative, thought-provoking work.