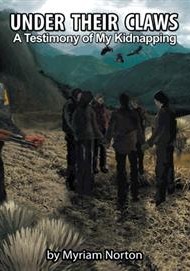 Myriam Norton’s kidnapping ordeal began in April 2003 when the Revolutionary Armed Forces of Colombia (FARC) arrived at her farm and abducted her. The 62-year-old was held for five months in primitive conditions, while her family frantically attempted to negotiate her release. Norton has written the memoir years later in hopes of calling attention to the situation in countries ruled by guerrilla terror, as well as to find some healing in the process.

Norton’s parents moved to Colombia when she was an infant to escape the Nazis in Vienna, Austria. She lived a privileged life, even spending time in the U.S. (where she lives now). Busy with her children, grandchildren and commercial flower growing business, Norton was aware of the random kidnappings going on around her. Before the kidnapping, she had been visiting her farm for the last time before trading it for a condo in Bogota because of security concerns.

Norton’s introduction to her new life is harsh. She is forced up steep mountainsides to the camp, where a handful of other hostages are being held. In a muddy makeshift tent, she is given bedding that consists of four logs placed on the ground, filled with straw that she is warned may be crawling with worms. Her provisions include “a pair of old, smelly, rubber boots with a hole in each sole, a bra the size of a ten-year-old, and two men’s underpants.” The guards are young, edgy and cruel, and Norton fears for her life when she loses a sewing needle she had begged a guard to borrow.

While Norton’s subject matter is compelling and will leave readers wanting to know more about the current situation in Colombia, the memoir is marred by an emotional distance that the keeps readers at arms’ length. Nevertheless, she offers useful insight into how a country can descend into such madness, while its citizens become “silent witnesses” to the events swirling around them.