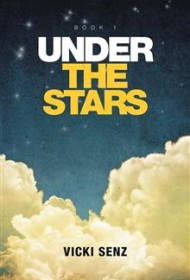 Under the Stars by Vicki Senz is a slender book with a focus on heartbreak.  The short poems included here are almost all made up of four-line stanzas. Direct and simple, they express pain and also hope.

Senz’s narrator seems somewhat bitter at times; she personifies love as an abandoner (“Love doesn’t come here anymore”) and addresses an absent lover with both tenderness and contempt (“It was those brown eyes / That got me in the first place / Even though they were full [sic] lies”).

Many, but not all of the poems, rhyme. None contain punctuation, which gives the text a clean look and feel, and interestingly, most entries are written in the second person. This direct address gives the pieces a sense of intimacy and a kind of advisory tone, as in “At Times,” which begins: “There will be times that life/ Will throw a spanner in the works/ Other times it will give you/ The whole bloody toolbox…”  Senz’s use of an extended metaphor about life’s troubles works well here, especially with the vivid adjective “bloody.” Later the poem switches to a boxing metaphor, completing the well-wrought piece about toughness and grit.

Despite such highlights, however, the poetry suffers several serious drawbacks. The rhymes are largely simplistic and predictable (“hide/outside”; “way/day”), lending an amateurish feel to the work. And Senz too often relies on clichés (“I am sick of playing games”; “…the hurt that cuts like a knife”). Ultimately, readers aren’t offered fresh or idiosyncratic insights into the struggles of courtship and relationships—elements that would make this work compelling and resonant.

Readers may appreciate Senz’s sincerity and the orderliness of the book, but overall, there isn’t enough original imagery or unusual juxtapositions to interest those looking for a more intense poetry experience.