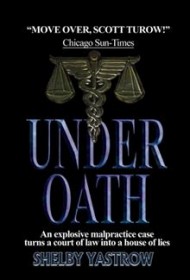 The technical revolution in ebooks has sent a good number of authors pawing through their trunks for decent out-of-print books whose shelf lives ended in the B.K. Era (Before Kindle). Some should probably stay in the trunk, but a few are worthy of a new generation of readers.

First published in 1994, when Shelby Yastrow was still a corporate lawyer at McDonald’s (he is now retired), Under Oath tells the story of a tormented mother’s malpractice lawsuit against a well-meaning OB/GYN whom she claims failed to diagnose her unborn baby’s Down Syndrome. Millions are at stake so, of course, lawyers swarm like flies. But when the case is finally settled, the real action is just getting started.

Legal lit has evolved significantly since 1994, when Scott Turow and John Grisham were turning Perry Mason on his ear — and O.J. Simpson was about to redefine most Americans’ sense of justice and courtroom behavior. Under Oath unfolds with none of the explosive, made-for-Hollywood pacing that readers have come to expect. To be fair, even Turow and Grisham are having difficulty feeding the beast these days.

But on the upside, Yastrow told a creditable story 17 years ago, even if it now feels slightly archaic in a highly commercialized genre — more courtroom drama than legal thriller. The author’s description of a morally complicated bar, gritty details of legal brinksmanship, and the stink of greed that imbues almost every page are what you might expect from a high-powered lawyer/author. He is shy on literary flourish and a little heavy on dialogue and genetics testimony, but Yastrow has re-delivered a worthy story of good-versus-evil and justice (not always the same thing) that doesn’t restore faith in the system so much as remind us why we often mistrust it. And the ultimate twist is worth the wait.

Under Oath is worthy of its rebirth.