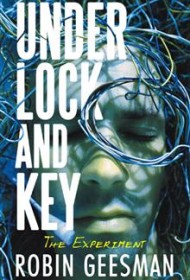 Drawing on her career in respiratory therapy (particularly artificial life support and ventilation), Robin Geesman launches a trilogy of psychological thrillers. Under Lock and Key: The Experiment incorporates elements of horror, medical mystery, and cybertech science fiction in a well-paced, inventive plot.

Saedie Parks is home from college for Thanksgiving. One night, a premonition wakes her, and she finds her mother’s hideously mutilated corpse hanging from a ceiling fan; in a corner of the bedroom, her father, William Parks, wields a knife. Despite Saedie’s best efforts to protect her siblings from their father’s subsequent attack, she, Kyle and Michael suffer serious brain injuries and end up on ventilators.

Dr. Rhymer offers the trio’s relatives an intriguing opportunity. His government research program will insert prostheses into the children’s brains – computer chips loaded with images of their past lives to allow them to gradually reenter virtual reality. Later, Rhymer decides to gradually incorporate an outsider, Marchessa Hewitt (in a coma after a violent mugging), into the simulation with the Parks children.

Marchessa’s father, Gregory, agrees to the biotech project but regrets it when scientists ignore Marchessa’s revelations about her attacker. When Gregory becomes difficult, he is sent on “vacation” to a mental hospital. As the epigraph reads, “A man who is of ‘sound mind’ is one who keeps the inner madman under lock and key” (Paul Valéry). By this definition, is Gregory so different from William Parks, a lunatic murderer?

The shift from the Parks family to Marchessa midway through is rather sudden; with any luck, the sequels will more successfully link their stories. It will be intriguing to follow the simulation program’s development amid the hints of government conspiracy. A careful edit would catch the frequent homonym slips. Fast-paced hospital banter, a confiding narrator, and enjoyable characters – especially the children’s grandmother, Emily – are pluses, making for a gory and gripping thriller.