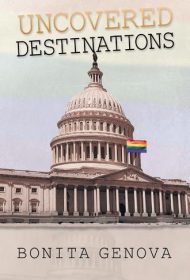 A sinister plot in Washington D.C. with links to WWII drives this quick-moving, same-sex, romantic-suspense novel peppered with unexpected and dangerous twists.

Ava secretly finds troubling notebooks in Edmund’s office that list Peter’s death a full year before it happened. Alarmed, she alerts her mother, who follows Edmund and catches him visiting the U.S. Capitol with strangers, including a woman who could be her body double.

For help, Micayla calls Stefania Puglio, an attorney friend who has connections to the U.S. Justice Department. Stefania has a strong desire to help so that she can reconnect with Micayla, for whom she has intense feelings. Stefania quickly learns the feeling is mutual.

Suspicions arise as further information highlights a deadly plot involving several men of German origin. The lives of Ava, Micayla, and Stefania hang in the balance as they struggle to unravel the mystery.

Complex dramatic action starts on page one. The pacing and twists are well considered and build to a strong, believable climax. The prose is clear and smooth, although thin in imagery. Intertwined with the evil plan is a tender exploration of the big-hearted feelings between Micayla and Stefania: “Mici, my soul has made a special place for you, and that’s where you safely reside. No more detours. No twists. No turns.”

While Micayla and Stephanie show palpable emotions, however, most of the other characters are flatly written, lacking distinctive quirks and descriptive elements. Additionally, the dialogue is often stilted (e.g. Stephania noting in conversation that “The school of life helped me become an expert at just how to sustain comfortability for others…”)

Despite its flaws, the book’s plot is intriguing and likely to appeal to fans of the genre.