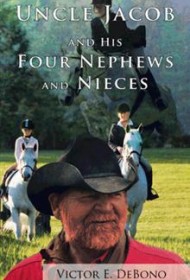 Victor E. DeBono’s Uncle Jacob and His Four Nephews and Nieces follows the story of wealthy, salty landowner Jacob, who realizes one of his life’s dreams by vacationing outside Ireland. He then turns his second dream into reality when he makes his farm into a zoo and horse-racing facility.

On his travels, Jacob ends up in Tunisia, where he meets Tanita’, a native Tunisian woman whose uncle, Ali, trades in exotic animals and young racehorses. Jacob purchases donkeys, emus, ostriches and world-class racehorses from Ali and reimagines his Irish farm while attempting to coax his four nephews and nieces into becoming top-notch jockeys. He succeeds with two of them and encourages friends and neighbors to buy horses so they, too, can enjoy the thrill of racing.

The story is lively, but the badly butchered English obstructs smooth reading. One sentence, for example, says: “However, Jacob promised them that the next time he’ll go to Liverpool, both of them with go with him.” Another baffles with this construction: “Jacob was getting worried when he comes to place the animals in their proper places, because of the water on the field.”

Punctuation is an equally daunting problem. Consider this passage; ‘”That’s O.K., Uncle. Paul and Patrick soon be here for their lunch.’ Replied Mary.” Names are no less confusing. There are two Marys, though he starts calling one Maria for no obvious reason, and two Johns, with little to distinguish between them.

In sum, while the basic outline of Jacob’s story is enjoyable, the book needs a thorough overhaul to bring it up to an easily readable level.