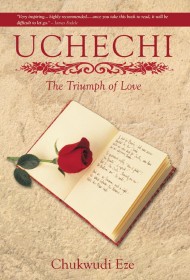 Eze’s narrative begins with the title character’s birth in a remote village. Almost reminiscent of a fairy tale, the descriptions of Uchechi’s life and tribal customs are vivid and lively, though not tied to any specific locale.

The first chapter suggests that Uchechi is not destined to fulfill familial expectations. Instead, he leaves his village to attend school and ultimately receives a scholarship to study at a prestigious university abroad.

The transition to college life is anything but smooth when Uchechi encounters intolerance in the form of a female student. Annarossa is nearly his equal intellectually but nonetheless reflects the narrow-minded attitudes instilled by her family toward people who are different. Ironically, it turns out that her family ancestry is “a very rich cocktail of human cross-pollination.” Annarossa’s grandfather has instilled prejudice without realizing those he “chose to hate and discriminate against were very well represented in his DNA.”

With the exception of an abundance of clichés (for example, the characters frequently go or went “the extra distance”), Eze’s writing is engaging, and Uchechi’s transition from village to college life is intriguing. Unfortunately, Eze’s character development is uneven. The characters from Uchechi’s homeland are especially appealing, while most of the non-villagers are less likeable and underdeveloped. Eze’s efforts to paint Annarossa as a complicated character fall short; she is alternately angry or curious, rather than a more believable mix of qualities.

Despite such issues, the story has real strengths. Because he doesn’t name the specific geographic areas in which the story takes place, Eze effectively demonstrates that bigotry can, and does, occur anywhere. And Uchechi emerges as a surprising hero in the two worlds he inhabits. Overall, the story will appeal to those interested in the triumph of personal will over bigotry.