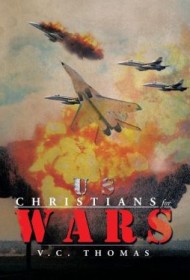 In this follow-up to his 2009 release The God Dilemma, engineer V.C. Thomas presents a “compilation of articles found on the Internet…which looks at who is mainly responsible for terrorism, death, destruction and genocide around the world today.” The culprit for these atrocities? Thomas answers: “Based on the numbers killed in Asia & the Middle East, the United States of America is responsible for terrorism and genocide on a colossal scale. Ground war with modern weapons and aerial bombing (4 years in Korea, 10 years in Vietnam, & 10 years each in Iraq & Afghanistan) is terrorism and genocide.”

With commentary and paraphrasing from Thomas throughout, US Christians for Wars culls its excerpted material from such media outlets as the BBC, the Guardian, Information Clearing House, The New York Times, and Washington Post; it also extensively quotes the Bible. For Thomas, many of the articles demonstrate a bias for the U.S. and Israel and against Muslims and Palestinians. Thomas is also highly critical of Christian and Jewish Zionists and hypocritical religious believers who ignore some of the ethical foundations of their faith.

Thomas has done a lot of research. He has pointed opinions and is fervent in his beliefs. The book, however, suffers from a lack of organization; it’s often difficult to discern exactly when the author is quoting from a given article and when he’s offering his own thoughts and interpretations of a given piece. While exposing bias is a thread woven throughout, most readers will also be turned off by the author’s own seeming bias against Jews and evangelicals. (To be fair, at times he defends these groups, so it seems that Thomas’s complaints aren’t necessarily against one particular group per se, but against human extremism.)

Overall, the book’s structure is so confused that it’s hard to be certain what the author is intending. The result is an extremely challenging narrative that is likely to deter most readers.