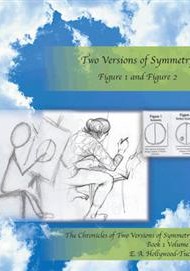 From the outset, Two Versions of Symmetry: Figure 1 and Figure 2 promises to change how readers view the world. In just 100 pages, the author purports to replace the way we see the simple concept of symmetry with something fundamentally different, something with far-reaching implications for everything from healthcare to criminal justice. The spirit of this paradigm shift is captured by the author’s epigraph, a quote from Einstein: “It is the theory that decides what we may observe.”

To make it concrete, E.A. Hollywood-Tuck describes the standard visual representation of symmetry, a circle with a median bisecting line (the eponymous Figure 1), followed by her proposed replacement (Figure 2), which consists of the same symbol placed inside (on the lower left part of the circle) of an identical but larger representation. The author notes that Figure 1 “is incorrect and the other version of symmetry, Figure 2, is the correct model.” If that concept sounds simple, it is. There is really nothing else to it, but the author claims that correctly understanding this model of symmetry will allow us to understand “the whole history and mystery of not only symmetry but also the origin of language, and also everything.”

Can this (or any) book deliver on such a grand promise? Not really.

Most of the chapters are spent reiterating the importance of understanding these concepts to the point of redundancy (major phrases are repeated verbatim, as in a technical manual). Only a small portion of the book is actually devoted to understanding the concept itself, and it does not render the utility of Figure 2 any more apparent than the description reproduced above. The text is serviceably written, but lacks any clarity concerning what it is that we ought to comprehend about this allegedly new worldview. And that is the unfortunate irony: Two Versions of Symmetry is irretrievably lop-sided. It promises so much but it just doesn’t get around delivering.