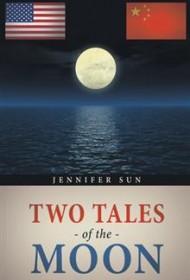 Jennifer Sun draws on personal knowledge of China and a former career in telecommunications finance for her well-crafted debut novel about the meeting of East and West, titled Two Tales of the Moon.

Lu Li fondly remembers hearing her grandmother’s legend about a moon fairy when she was a little girl in 1960s Shanghai. Now, in 2009, Lu works for a Manhattan investment firm, heading up negotiations with two Chinese companies. This will involve multiple trips to China, a daunting prospect given she hasn’t been back there in 30 years.

Meanwhile, longtime friend Sage Donovan—who learned a slightly different version of that moon folktale as a child—puts Lu in touch with Sage’s twin brother Will, whose company is being purchased by the Chinese telecoms company Lu liaises with. Sage’s interest in connecting Will and Lu is more than professional; she thinks they’re perfect for each other. And indeed, their attraction proves to be instant and strong.

Sun paints a compelling picture of China as a country of contradictions. Lu marvels at luxury properties but simultaneously frets about the poor working conditions and pollution her company seems glad to ignore when making deals. Complications ensue from this ethical issue. As Lu observes to Will: “Peel back the surface glitz and glamor, and what’s underneath is not too pretty.”

Frequent descriptions of clothing and food enliven the settings, while flashbacks to Lu’s traumatic girlhood departure from China add psychological depth. More could have been made of Lu’s reunion with her estranged mother, however, and the conclusion feels rushed. Additionally, there is too much jargon-filled business talk early in the novel, but by the end Sun achieves an effective balance between the professional and personal.

Blending romance and ethical intrigue, this is a unique novel that should please  readers who appreciated Kevin Kwan’s Crazy Rich Asians and Sarah Howe’s Loop of Jade.