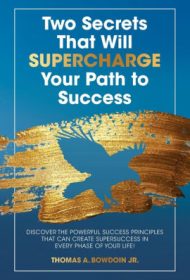 Proponents of positive thinking urge goal-seekers to dream big. Author Thomas “Andy” Bowdoin, Jr. echoes this idea in his book, arguing that the use of visualization and self-affirmation statements are the “secrets” for achieving goals.

Bowdoin’s book intertwines motivational lessons with his personal story: Throughout his career, he has used his advertising and marketing skills to operate varied businesses and also served as city councilman and mayor of Perry, Florida.

He attributes the most effective visualization techniques to positive-thinking entrepreneurs like Dale Carnegie, Napoleon Hill and David Schwartz. How strongly people believe in their dreams and their willingness to stay the course despite challenges, Bowdoin writes, is the difference between becoming merely “successful” or “supersuccessful.”

Bowdoin believes that surrendering one’s will to Jesus is pivotal to making visualizations powerful, and he incorporates his Christian beliefs into the narrative. For example, he uses the religiously weighted word “confessing” instead of the secular term “affirmations.” He also quotes scripture. This may be offputting to those who don’t share his religious beliefs.

Readers might also take exception to some of the author’s quotes that pepper its pages, such as: “You can achieve whatever you can believe! If you want to achieve more, increase your belief more!” Because life doesn’t guarantee a level playing field of opportunities, these can seem like mere platitudes.

Bowdoin is at his best when offering real-life examples of “big dreamers” who have faced down their challenges, like hotel mogul Steve Wynn, who realized his dream of owning an expensive painting, only to accidentally destroy it. He also shares the highs and lows of his entrepreneurial career, including his time behind bars for wire and securities fraud. His recounting of this jail time is riveting. Unfortunately, it turns into a rant against the Justice Department, which distracts from his overall message.

Despite the limitations mentioned, Bowdoin’s book is interesting and thought-provoking. Those who share his religious leanings will find much to appreciate here.