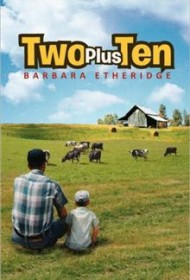 Two Plus Ten is a memoir of growing up on a farm in rural North Carolina. Briefly spanning the ’20s, ’30s and ’40s, it recalls a more innocent time when kids splashed in the river to cool off in the summertime — even when they didn’t know how to swim.

The “two plus ten” refers to author Barbara Etheridge’s parents and their 10 children. Etheridge is the youngest daughter and number nine in the family line-up. She offers memories about the early family years from her brother Henry,15 years her senior and born in 1917, then takes up the story, filling it with recollections, musings and a few memories from other family members.

The memoir is really a paean to Etheridge’s mother and father, and both siblings are lavish in their praise. There are some compelling details of life on a farm — Henry recalls “Mama” powering up her iron with gasoline or lit alcohol and corncobs — but most of the stories are too limited in scope and too family specific for wide audience appeal.

Some of it is in the telling. The author and her brother recount their stories matter-of-factly, softened by time and distance. Thus, readers gets this rather undramatic account of a bus accident on a foggy day, when Etheridge’s brother was driving: “Another thing that sticks in my head about school buses was the time that Ben was driving the bus in the 1940’s…we were almost to the highway when we hit a Coca Cola truck head on. It was pretty bad. Jerry and I were not hurt, just shook up, but Ben had a concussion and was unconscious. Several others were hurt also, but everyone eventually got better.”

This is the kind of memoir people often wish someone in their own families would write. Etheridge’s extended family will have a collection of stories to keep the family name alive into perpetuity. Although her book isn’t for a mass audience, as family historian, Etheridge can be proud.