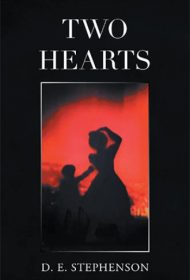 In confronting troubling memories and a truly wrenching loss, D.E. Stephenson creates a memoir of her childhood in Germany and adulthood in Australia.

Born into a middle-class family in Hamburg in 1937, the author was only six years old when, in 1943, Allied warplanes leveled the city. Separated from her family, she suffered serious burns and, after the bombing, found her mother dead. Stephenson never saw or heard of her identical twin again, but eventually discovered her older sister had survived. With their father away serving in the German army, the two were sent to live with their loving and protective aunt, in the comparative safety of the countryside.

The unresolved disappearance of Stephenson’s twin provides a poignant and heart-tugging throughline for her story. Unfortunately, the writing doesn’t always live up to this rich material. The narrative is dotted with typos and awkward sentences (at one point, Stephenson recalls her older sister and herself “looking out and feeling like caged birds needing to be free to work up a good appetite”).

Readers who can overlook these issues, however, will find compelling episodes and details. During the war, the author sees her aunt help a young Jewish couple who was escaping the Nazis. After it, her father, who had been captured and kept as a POW in France near the war’s end, returns and remarries in Germany, only to learn too late that he has also fathered a child back in France.

Stephenson spends too much time on less compelling details from her young adulthood, which saw her leave Germany and join her boyfriend in Australia. Their subsequent marriage and two children are covered only cursorily, with more time lavished on adopting a cat than on having her first child.

Nonetheless, Stephenson’s determination to share her experiences is admirable, and her separation from her twin sister haunting. The author’s fascinating life story would provide a wealth of potential for an aspiring screenwriter or historical novelist.