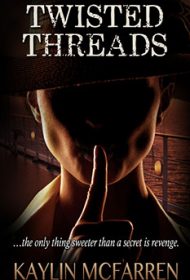 Perfectly titled, Twisted Threads is a dramatic, sexy romantic mystery that will keep readers guessing through every unexpected turn of events.

Akira Sato is a geisha-turned-assassin, a profession she doesn’t enjoy. She’s been tasked with identifying and eliminating the individual or couple thought to be the responsible for the mysterious death of Keiko, the sister of Mitsui, her boss. Akira must take on an assumed identity, observe the passengers of a cruise ship, and pull off an assassination without being discovered. To do this, she must get close to the Lyons family, whose members may be linked to Keiko’s death.

To further complicate things, her every move will be followed by her fake “father,” an associate of the dangerous Zakura-kai gang tasked with making sure Akira finishes the job. Her traveling companion is also responsible for punishing Akira for mishandling an assassination, and Akira realizes that she is unlikely to survive the “punishment.” She must devise a plan to escape with her life.

At this point, the story is already multi-layered and complicated—and it’s only just beginning. As more characters are introduced, motivations and suspects become muddied and the various “threads” begin to take shape. This is the story’s single downfall: From the start, readers must recognize and catalog a multitude of characters, which can be confusing. However, diligence pays off in the form of surprising plot developments, driven by the diverse group of primary and secondary characters.

The story moves quickly and the action begins almost immediately. Disappearances and murders pile up, and Akira attempts to solve the seemingly unending mysteries, all while keeping herself safe and engaging in a chemistry-laden romance with Devon Lyons, nephew of suspect Paul Lyons. Fast-paced intrigue and delicious, soap opera style drama combine with steamy sex scenes and constant surprises, right up to the thrilling conclusion.

Overall, Twisted Threads delivers an indulgent page-turner that will appeal to fans of sensual and exciting mystery romance.