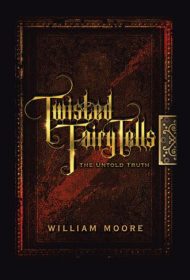 Since 1937 with the production of Snow White and the Seven Dwarfs, almost all fairy tales have been “Disneyfied.” The protagonists live happily ever after, and the villains are disappointed. In Twisted Fairy Tells, however, William Moore reveals, through his character Charles Wellington, the “Guardian” of these stories, “The Untold Truths” behind many of these tales. Warning: children who happen upon this book will not fall asleep with “visions of sugar plums.” This is the stuff of nightmares.

If you think Kris Kringle is a jolly old elf, just wait until you see what happens to parents who don’t pay for their children’s gifts. You’d better not plan on rabbit stew, or the Easter Bunny may hide your children instead of chocolate eggs. Meanwhile, readers discover that Pinocchio’s bid to be a “real boy” has bloody consequences for some of the children he encounters.

In all, the collection reveals the “truth” about more than a dozen fairy tales and children’s books. Some characters appear in more than one story. For example, the wolf in “The Three Little Pigs” is the same wolf that stars in “Little Red Riding Hood.” And an evil sorcerer shows up in several tales to snatch the first-born children of royalty and commoners alike.

The book suffers from two issues. First, the tales are even more grim than the Grimm brothers intended. There is never anyone to root for, as the protagonists are as evil as the antagonists, frequently psychotic killers.

Second is Charles Wellington’s disappearance throughout most of the book. The character starts the book in a short introduction and returns in a final chapter. His commentaries about each tale would have tied the stories together for a smoother read.

Still Twisted Fairy Tells is recommended for adults and perhaps older children with a high tolerance for fright. Readers will keep turning the pages just to see what gruesome bit of nastiness the author devises next for his no-longer “Disneyfied” characters.