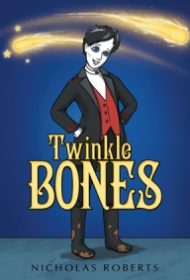 In Nicholas Roberts’s picture book, a boy “made of bone” wants to change his bleak world.

Twinkle Bones lives “way up there in the sky” in Bone Head Kingdom. But the kingdom is gray and black, and no one has any fun “because fun had not yet been invented…”  Twinkle wants to change things but doesn’t know how. Then, when walking through a dreary forest, he picks up a hollow twig and blows into it. Startled by the beautiful sound, he decides to add holes to improve it. When more lovely sounds emerge, Twinkle experiences “a new emotion called happiness.”

Twinkle also realizes that when he dances, his bones click and clack together causing them to spark and glitter. Excitedly, he plays for the townspeople who experience the same effect, and “suddenly it wasn’t dark and dreary anymore.”  Roberts concludes by explaining that when we look up at the sky, it isn’t stars we see, but the Bone Head citizens playing music and dancing.

Admirably, the story honors the joy of music, offers a unique explanation for stars, and presents striking illustrations. Unfortunately, it suffers from some flaws. Twinkle is described as a “bit of a rebel,” but the evidence is slim: He wanders the forest “looking for interesting things” and asks “endless questions.” Also, readers will puzzle over the following line: “He was laughing, again for the very first time in history.”

Perhaps the story’s most perplexing aspect, however, is why the characters are made of bone. This premise is so unusual that it begs for an explanation, which is never forthcoming. Additionally, because the town and its people are first depicted in black and white, to reflect their dreary situation, they look like normal people, rather than made entirely of bone.

In sum, the idea that music can create enough happiness to fuel the stars in the sky is intriguing, but some revision is required for this story to reach its fullest potential.