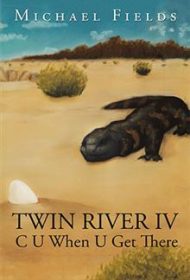 This is the fourth and final thriller in a gruesome series set in the fictional hamlet of Twin River, Pennsylvania. Like the others, this can be read independently, although it will resonate more for returning readers.

Throughout the series, Michael Fields has honed his characters to a fine point. This title picks up in 1998, dropping the usual villains—the Philly mob and Fields’ antihero, mob hitman Wesley Palladin—in favor of more personal demons.

As usual, Fields interweaves two major storylines. One takes place in Death Valley, where now-insane Cain Towers has been plotting revenge against his mother and twin brother, Niles Wilson, in a twisted tribute to his murdered father. Cain and his dangerous uncle, Abel, hijack a school bus to drive to Twin River, killing a girl and kidnapping 14-year-old Stanley Banks. (The title pays homage to Stanley’s favorite song by the rapper Coolio).

The second plot, back in Twin River, focuses on the town’s high-schoolers, with returning character Vietnam vet Gene Brooks playing a role. The high school’s corrupt, gun-toting principal is abetting a teacher’s groping of student Stacy Hawk, sending two thuggish students to beat up Stacy’s brother Hunter. As Gene tries to keep the Hawk family from slaughtering the school staff, the students who attacked Hunter initiate an appalling, if accidental, school shooting. The two plotlines converge at the story’s deadly end.

This is nasty stuff, and the casual violence—often visited against young women—is disturbing. Additionally, the plot could use clearer explanations for its characters’ sometimes-puzzling motivations and would read better had the author eliminated some superfluous characters, such as Stanley’s father.

Nevertheless, the novel’s pacing is better this time, and Gene Brooks lends the novel a kind of noble savagery in the vein of the Billy Jack movies from the counterculture era. This is not a novel for the faint of heart, but overall, it’s a fitting finale to a brutal and ambitious crime series.