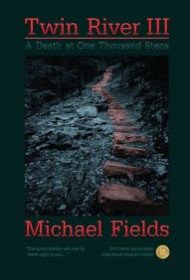 This novel is the third in a series of densely plotted and heavily populated crime novels by author Michael Fields that have earned a respectable audience and critical praise.

This story takes place in 1980, and the violence, machismo and locale recall nothing so much as David Morrell’s infamous debut novel First Blood, later adapted as a longstanding franchise for Sylvester Stallone. The novel is set in rural Pennsylvania near a real-life landmark known as Jacks Mountain, famous for its 1,000 steps.

The majority of the action focuses on a pair of capable killers trying to do the right thing. Gene Brooks’ multiple tours in Vietnam revealed him as a quiet and deadly killer, fond of his “Arkansas toothpicks”—heavy, deadly daggers invented by the creator of the Bowie Knife. Now, he works as a janitor in his son’s school. His counterpart is Wesley Palladin, a mob assassin raised by his murderer father who is trying to leave the family business by becoming a security consultant to the small town’s bank. As mob boss Don Scavone’s operation kidnaps local girls to facilitate sex trafficking and pornography, our two heroes thwart him at every turn, “disappearing” enforcers and thugs sent by Scavone to come after them.

The unending cast of townies, low-lifes and grifters may be dizzying to readers jumping on this series train mid-stream, although fans of world-builders such as the late Robert B. Parker may be unfazed. The writing is solid, if a bit dated and overtly masculine, and readers should also be forewarned that the last three words of Twin River III are “To be continued…,” so those expecting a neatly tied up ending may be disappointed.

Nonetheless, readers who appreciate grisly thrillers in the vein of Jeffery Deaver or Quentin Tarantino will find plenty of ferocious entertainment within.

Available to buy at: