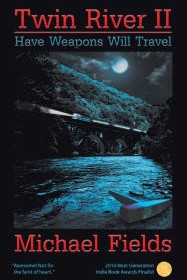 Twin River II is the second of a trilogy of crime novels by Michael Fields set in rural Pennsylvania.

This story opens on a flashback circa 1966 that forges the backstory of mafia hit man Wesley Palladin. On a hunting trip in the Florida Everglades, 14-year-old Wesley is taught the ugly facts of life by his father, a mean-spirited but skilled assassin, during a violent encounter that ends in the death of a stranger.

The novel then picks up in 1980, in Alexandria, Pennsylvania, on the banks of the Twin River, where local high school sophomores Matt Henry and Connor Brooks are dealing with two toughs, the sons of a deranged local reverend. In fact, the entire town seems saturated with dangerous undertones of sexual misconduct and violence, some of which date back generations.

Matt’s father owns the town’s bank, but has disappeared under unspecified circumstances (perhaps this was revealed in the first book?). To protect the bank and himself, Matt seeks the services of Palladin, who has posted an ad: “Have Weapons Will Travel. Guaranteed Protection. Individual, Home or Business.” Later, Matt learns about Palladin’s criminal past, but also recognizes the inherent good in this substitute father figure.

Meanwhile, Palladin finds a kindred soul in Connor’s father Gene —a Vietnam vet with a quiet but deadly countenance, who spouts grim philosophy, such as: “Death has a finality beyond faith and reason.”

Fans of Dirty Harry, Charles Bronson’s Death Wish and other purveyors of vigilante violence will appreciate the swift justice meted out by Palladin and Brooks as the story unfolds. One drawback, however, is the odd juxtaposition of the graphic violence with the adolescent enthusiasm of Matt and his buddies. Still, Fields manages to tie it all together skillfully.

Readers who appreciate the retro brutality of classic ‘80s thrillers—tonally, the novel captures the noble heroics and casual violence of writers like Elmore Leonard or Robert B. Parker—will find a kindred spirit here.