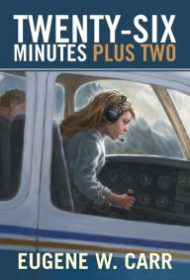 Small changes in one’s actions and reactions to daily events can have a major—and possibly damaging—impact on the life loop of others. Such is the premise of this evocative and insightful book consisting of three interlinked stories.

Jim, an air traffic controller in metropolitan Denver, is central to all of the stories, each building toward a tension-infused situation as he tries to calmly help frightened 13-year-old Kim land a small plane after her father, the pilot, suffers a stroke in midair. The early details are repeated word for word in each, save for a single yet important change in Jim’s reaction in the final two minutes after the plane reaches the ground, altering what ultimately happens both to him and others in the future.

As the stories progress, the author backtracks into the past, offering key information of early life events that previously impacted who Jim has become. The book also spins into the future to show what changed and why.

While Carr writes in understated prose, a quiet power emerges from his words as each gripping and tension-infused scene unfolds. The short book, which can be read in a single sitting, develops into a modern-day parable of sorts, reminiscent of the messages behind the beloved holiday movie It’s a Wonderful Life as well as the emotionally rich theme behind O. Henry’s short story “Gift of the Magi.” The author adds suggested discussion points at book’s end.

The book requires some editing to correct occasional typos. Nevertheless, the message within this sensitively written work makes it well worth one’s time and attention. It could be a popular choice for book clubs in particular and an inspiration for those who worry that their actions in life never really matter.