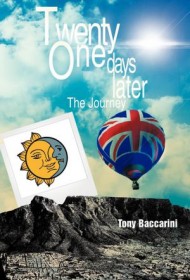 In Twenty One Days Later: The Journey, Tony Baccarini explores in both prose and poetry his emotionally dramatic journey during his stay at Kenilworth psychiatric clinic in July 2012, an experience brought on by a “failed relationship, bipolar type 2 disorder, grief and resentment issues” and the seven-year delay in grieving for his son Luca, who died at age 14.

The book opens with his “Life story,” which includes tales about his: working-class east London origins; recovery from clubfoot operations; juvenile delinquency; enrollment in the London College of Furniture; and marrying a woman with four children. It also tells of Luca’s birth and eventual death by car accident; financial problems; and the downward spiral that led to the author’s checking into the clinic.

The poem “Ups and downs,” accompanied by a graphic of a sailboat on a rollercoaster of a wave, describes the author’s experience with bipolar disorder: “When the mania reaches full tilt / There are spending sprees that never seem to halt / Then it starts to recede and go / And you’re heading down a path to a [sic] all time low.”

Baccarini praises the role of therapy in “Delusions” and cautions readers that healing involves questioning one’s self: “Are you unstable and where can it lead / If you fall from the right path it could make you bleed / Are you delusional or just a keeper of unclear thoughts?/ Therapy is clear but you will need to learn to be taught.”

While clearly heartfelt, the collection is hampered by overly familiar sentimentality (“through my heart and soul”) and metaphors (“It’s all about two paths that always meet”). Additionally, the prose sections suffer from run-on sentences and a lack of paragraphing that can be disorienting, as are the many copyediting errors. Despite allof that, these poems display an admirable vulnerability that others in their own processes of recovery may find heartening.